Yes, uranium ore is for sale online (see the best sources below). You can buy and own raw, unprocessed uranium and thorium ores in the USA as geological specimens for the purposes of education and even science hobbies involving Geiger counters, cloud chambers, and more. Some rock specimens may contain trace elements of interest while others can be as high as over 47% elemental uranium! 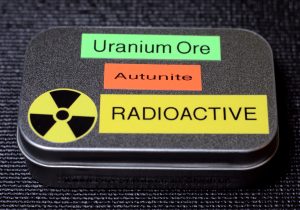 Where is Uranium Ore for Sale?

If you want to buy geologic uranium ore specimens that emit the highest highest levels of measurable radiation of any ore available, and even fluoresce (glow) brightly green in UV light (even regular “black light” i.e. no special prospecting light required) then you want to buy autunite (calcium uranyl phosphate) from:
Rocks Unlocked (RocksUnlocked.com)
or try
Geiger Check (GeigerCheck.com)
You’ll also find other items like Jurassic Canyon uranium ore rocks and more to add to or even protect your collection from casual pilfering or small kids. The link above are the most affordable and reliable sources of this hard to find mineral no longer available on numerous other sources. We know because each of us own one of the other business and we each forged direct relationships with the miners. It’s no secret we all have the same IP address – we’re friends and/or owners that started out trying to find nice specimens as Geiger counter checks, and uranium glass left something to be desired (esp. if you have a lesser-sensitive device like a side-window probe).

When it comes to uranium that is for sale, legally, autunite (calcium uranyl phosphate) really hits it out of the park for radioactivity and fluorescent mineral hobbies. The glow really gives it that cinematic, radioactive appeal (although a little UV light is actually required) and the uranium is truly what gives it that classic day-glow green hue. 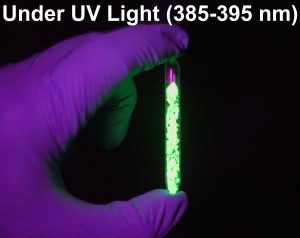 Autunite is composed of over 47% elemental uranium and even shows noticeable higher radiation levels than even refined, smelted U-238 metal called Depleted Uranium (DU)! How? It’s because unrefined uranium ore in the form of Autunite still contains small amounts of the more scarce and highly potent isotope U-235, as well as trace radium etc. These sister isotopes and elements naturally occur in the nuclear decay chain and, while low in amount compared to the abundant U-238, can make ore that’s only close to half uranium emit more radioactivity than industrial DU metal.

Many, common things in our lives like products used for maintenance or even art can be highly dangerous if misused, but are also completely safe when handled and stored properly. It’s important to educate oneself about proper storage and handling of uranium ore before buying it.

In general, it’s kept in metal containers to shield much of the radiation and stored some feet from living things. The Inverse Square Law of radiation means it dissipates more per inch with each additional inch, so even just a few feet away any normal Geiger counter cannot even detect its presence and risk is abated.

The biggest consideration is getting particles inside of you, that’s why cleanup of oneself and any surfaces is important as not to ingest or even inhale small, solid particles that break loose, as was a common hazard of old school thorium lantern mantles, since they made fine ash.

With a little reading, care, and common sense, uranium ore is safe to buy and own. This is why it has always been legal and collecting it in the field was a even very common (at times viral!) family pastime in the mid 21st century!

When you buy uranium ore online from our known sources you’ll always receive a package that reads below .5mRem/hr. On the parcel surface, with a label including text and numbers required by the NRC and USPS or or other carrier. This makes it perfectly legal as an “excepted package” exempt from many considerations that would apply to real hazmats.

Many, many people get confused about a piece of federal code by the Nuclear Regulatory Commission called NRC, 10 CFR, “§ 40.22 Small quantities of source material”. This is frequently misinterpreted as appearing to allow basically any US citizen to posses or even sell limited amounts of refined, radioactive products like DU and indistrial uranium or thorium compounds etc. as long as they intend to use it for constructive purposes. We have communicated directly, at length, with senior officers at the NRC and we can assure you this is not the case. To the technical letter of the law, this does not even apply to tiny samples.

First of all, section 40.22 is intended for institutions, and I quote Betsy Ullrich of the NRC, “…not private individuals”. Secondly sale or “|initial distribution” is prohibited by subsection (e) of said code without an additional, bona fide, applied-for-and-issued license that is difficult to obtain because it requires experts, considerable lab equipment, etc. Thirdly, 40.22 does not apply to 39 of the 50 US states that have become “Agreement States” meaning they have their own, state-level regulations including possession of radioactive materials.

The Answer: Stick with ore! It’s often prettier, can be just as active (or more, as show above), and is generally legal to possess as long as not misused (“generally” as in: there may be certain buildings, communities etc. where it is not permitted). 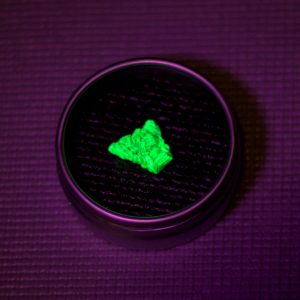 Because, like so many things, it is perfectly safe when stored and handled properly, unprocessed uranium ore has remained legal to buy, sell, and possess in the United States for many decades.

In the mid-1900’s Geiger counters and “scintillators” (amplified detectors for finding ore at distances) were popular recreational hardware with which families could go camping and prospecting, hoping to find and even sell uranium ore in a rather prolonged “uranium rush”. National parks used to issue pamphlets recommending safe practices in collecting uranium and taking it home (like washing hands and not keeping in pockets). While some precautions about nuclear materials have become more rigid since then, the more we know, most of it applies to industrial or military-related substances.

The Parks Service didn’t stop issuing such pamphlets referring to safe uranium-collecting fun because hobbyists got cancer from rocks or anything in subsequent years – they likely stopped because of negative publicity and lack of public understanding. Baseless stigma.

For example, 3 buckets of uranium-bearing rocks were noticed in a Grand Canyon National Park museum. When the story hit the press it went viral and everybody lost their marbles, reporting everywhere that thousands of people including children had been “exposed to dangerous, ionizing radiation”. Despite scientists and officials descending on the situation and determining no one was harmed or really even placed at risk because of the low amounts of uranium involved and the Inverse Square law etc., what mattered was public ignorance, not facts. The big story was the erroneous harm; the confirmation there had never been any danger was of little interest to the press (zero retractions and few follow-ups). So the Parks Service freaked out about their reputation (not safety) and bulldozed any and all uranium rocks far away from rest areas and public access (the the dismay of local hobbyists).

https://scihobby.com/how-to-make-a-cloud-chamber/When people have no interest in something they have little understanding (and often little tolerance) of it. One of the most common questions about uranium ore sale and purchase is, “What on Earth would anyone want it for?!”, asked with anything from curiosity to naïve, accusatory contempt suggesting inevitable villainy. To anyone bitten with the Geiger counter bug, the answer is self evident: because it’s cool. A more informative answer is that, besides demonstrating different levels of alpha, beta, and gamma radiation between different, collectible specimens (which is reason enough), other uses include source material for a cloud chamber (an easy DIY project that makes radiation leave contrails visible to the naked eye)… 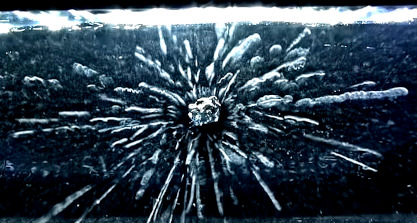 …experiments with digital or film photography, building a spinthariscope (another device that makes effects of radiation visible, but in the form of sparkles) or other radioluminescence (glowing due to nuclear emissions) experiments with phosphors like copper-activated zinc sulfide, and much more. These demonstrations, experiments, and other activities are safely performed not only by hobbyists and parents but teachers and institutions who are among customers buying uranium for sale online.

Can you buy uranium?

For science, education, and hobby, yes! Check out radioactive geological samples and more at: RocksUnlocked.com !